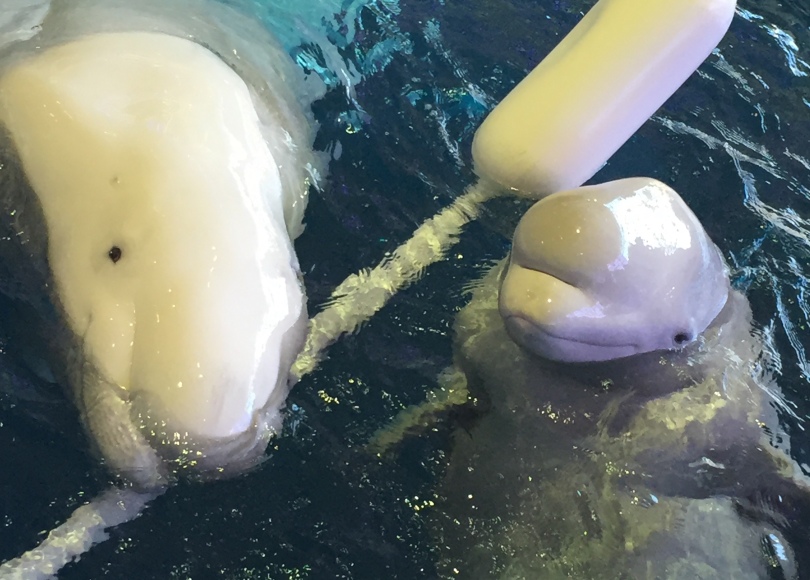 One morning, in that weird muffled dream space where she says the funniest things, she sang part of the song “Edelweiss” from The Sound of Music and said, “Guess what I’m thinking of!” And I said, “What do belugas have to do with The Sound of Music?”

She was thinking of elderflower macaroons, which she wanted to try at our local hipster tea house, but she got the name wrong.

Edelweiss flowers are actually poisonous and will kill you.

Most of her waking thoughts are devoted to “How can we see a beluga?” And not just one in an aquarium—actually encounter a wild beluga on its beluga way  to wherever belugas go.

She found out that if you can get to Churchill, a town in the far north of Manitoba known as “The Beluga Capital of the World,” you can take a boat excursion where they actually tie you to the boat by the ankles with a bungee cord and then they pull you along and the belugas follow you and you get to sing to them and talk to them (belugas really like human singing, apparently) all while being dragged behind a boat in freezing cold water.

A was all ready to book this trip and buy us matching wetsuits until I said, “Wait, how do we get to Churchill?”

First, we would have to fly to Winnipeg, which isn’t exactly a daily route. Then the only way to get to Churchill from Winnipeg is a train ride that is only 47 hours—yes, just 60 minutes short of two days.

Not having that extra hour would really make the trip fly by.

“We could play card games!” said A. “I have a travel chess set with little magnets.”

“We would murder each other,” I said.

To prove it, I began to recite the 2002 Oscars ceremony, from memory. A counterattacked by rattling off all the finer points of contract law.

“And then Tom Cruise exited to a round of applause and Whoopi Goldberg descended from the ceiling in a Moulin Rouge costume,” I said. “This is what all 47 hours would look like.”

“I’ve seen every Oscars ceremony,” I said. “Before YouTube, I taped them.”

After looking up the train ticket prices and realizing that if we didn’t pay for first class seats, we would have accommodations that did not include a shower, A grudgingly accepted that there are other ways to commune with belugas.

“We can go see the belugas at the aquarium. But we won’t get to swim with them, and they’ll be incarcerated,” she sighed. 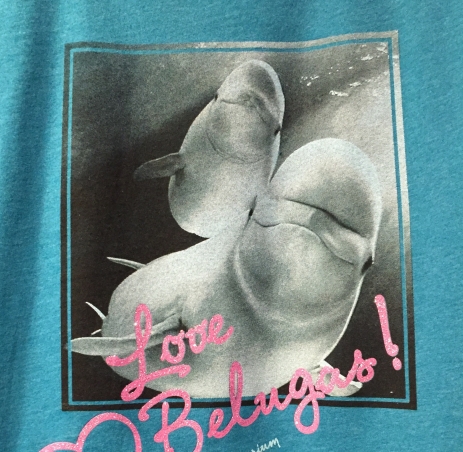 We drove several hours to see belugas at an aquarium, and we got up extra early so we could get to the aquarium the moment they opened.

Our cashier was somewhat lacking in the warmth and welcoming aspects of customer service. Actually, she was outright mean to us. Normally, I give people the benefit of the doubt, they’ve had a long day, the people before us might have been jerks, etc, but the aquarium had only been open for three minutes. I wish I knew what had happened in those three minutes to make this lady say, “Fuck everybody, I am done with this day.”

A proudly showed the cashier her coupon for being a teacher on her phone and this lady snapped, “You were supposed to print that out. That’s what it says.”

It took her fifteen seconds to take down A’s information by hand, but the entire time she just kept digging in, “You were supposed to print it out.”

A gets especially  stressed out when accused of not following directions, because 99% of law school is just learning how to follow increasingly complicated directions. She tried to explain that the directions to print out the coupon weren’t clearly stated and that most places don’t require you to print coupons out so she hadn’t failed to follow the directions at all, and then this lady barked at me, “Are you a state resident?” and I almost started crying.

A valiantly defended me. “I brought her here! This is her first visit!”

I managed to choke out, “I’m from Michigan,” and the lady scoffed, typed something, and then barked a second time, “ARE YOU A RESIDENT?”

The lady rolled her eyes and asked if we wanted to add any shows to our tickets.

A said, “Can we see the show with the baby beluga?”

The lady snapped, “The baby beluga is not guaranteed to be a part of the show.”

“We’d like to see it anyway!” said A, with giant Tiny Tim eyes pleading for mercy.

I wanted to say, “Lady, we’re lesbians, we know wild animals don’t exist for our entertainment. If the baby beluga isn’t up to performing, we totally understand,” but at this point, I was prepared to hand over my watch in order to get these tickets, just to get away from this lady.

Finally, after a concluding scoff, she threw our wristbands at our heads and we booked it out of there.

A always assumes that if we get less-than-stellar customer service, it’s a homophobic thing, because she grew up Catholic, whereas I always assume the person isn’t being paid enough to care about their job, because I’m a socialist. But we agreed that this lady was neither homophobic nor underpaid, she was just over that baby beluga.

A hustled me past the turtles and the seahorses and even the bioluminescent jellyfish, and when the first beluga reared its adorable earless head, she actually screamed. We got to see the belugas do all their behaviors and vocalizations in the show (and the baby beluga was part of the show!) and then we got a front-row seat to watch their vet checks and training session. After that the belugas swam right up to us in the tank with their toys. They were so close we could’ve touched them. 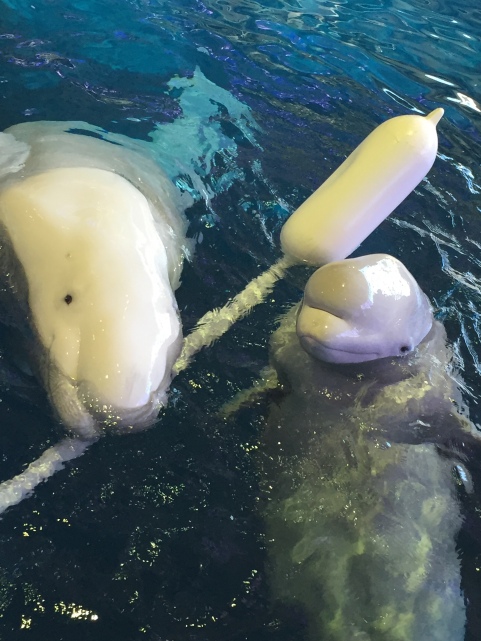 “The wild ones would never get this close,” I said. “This is a much better deal.”

A stared into the tank like Captain Ahab and said, “I intend to be dragged behind the boat.”

I insisted on taking a picture of the information placard with the map of the belugas’ geographical range to prove that they only live in Arctic temperatures.

“It’s not that far from the rainforest,” said A. “The water wouldn’t be that cold!”

On our way out, we considered going back to that cashier and saying, “We’re in love and we want a joint membership! Can you take care of that for us?” but we were too afraid.

Update: the aquarium has actually contacted me to offer their apologies and I’m like “Oh don’t worry about it, I have no dignity or shame at all when it comes to belugas. Have a great day!”