Having lived in various corners of the Midwest all my life, I’ve had little to no desire to ever spend time in the state of Wisconsin. Oh, how wrong I was.

Long story short, the only stop where we could see Hillary Clinton speak was Milwaukee. And we were not going to miss a chance to see Hillary Clinton. From the moment we bought the tickets, A has been counting down with a level of intensity that is usually reserved for space shuttle missions.

Finally, after a month and a half of waiting and worrying about what to wear, we arrived in the fine city of Milwaukee, where even the parking garage attendants are super cheerful and friendly, even when they’re freezing. Our first stop was the Milwaukee Public Market, which is a lot like the Food and Wine Festival at Epcot, only the food is all from local vendors and everything is way less expensive.

“We could buy a chocolate swan full of jellybeans!” said A. “Or oysters! Or sandwiches!”

For lunch, I ate the spiciest burrito I’ve ever had. Milwaukee was surprising me already.

While we ate, A and I watched a Mexican telenovela set in a hospital decorated to look like a Ramada Inn circa 1987. 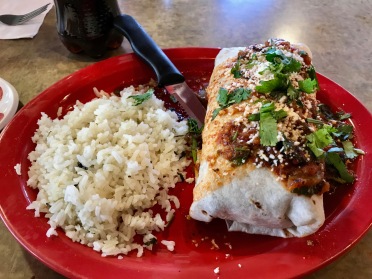 The sound was turned down and we can’t read lips in Spanish, but the plot was this: a very hunky gentleman in a wheelchair—who had somehow managed to get his clothes specially tailored to cling to his muscles and keep his bangs immaculately swept despite being hospitalized—was flirting with his very cute nurse, whose hair was layered to frame her face to a degree of perfection that I have never seen, so clearly they had to get together. When she helped him up from his wheelchair in order to do those parallel bar things, it looked like the scene was set up perfectly for a mid-physical therapy make-out session. But then the hunky guy FELL! And not right into the nurse’s cleavage like you would expect! He hit the ground like a beautiful sack of chiseled potatoes and started convulsing exactly the way someone seizing would not.

Smash cut to hunky guy in his hospital bed, bangs still flawless and jawline lit so beautifully that it moved the cute nurse to actual tears.

The tearful nurse made an impassioned speech at his bedside and then fled the hospital, which apparently only had one other employee with the sole job of walking back and forth in the background every thirty seconds.

And that was the end of my new favorite show.

Sadly, we could not stay for the next episode. Milwaukee was calling us! We headed out into the slightly Arctic wind to our next destination: the Milwaukee Art Museum. 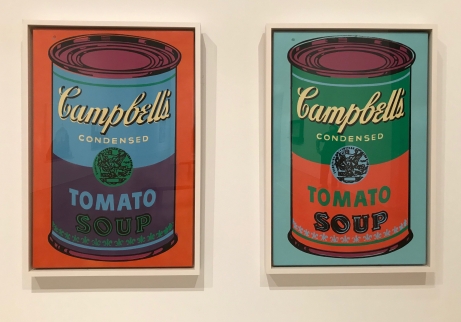 I’ve been to a lot of art museums in my time, and I have to say, the Milwaukee Art Museum is just about perfect. Not so big and crowded that it’s overwhelming, but large enough to have some really incredible works and lots of hidden treasures. You can really get lost and explore and discover art that you didn’t know existed, without actually getting lost and then panicking and feeling total rage and defeat because the Renaissance wing is supposed to be on the second floor but the damn elevators only go to the mezzanine.

Anyway. I can’t recommend it enough. The building is beautiful, the staff is very friendly and helpful, and the gift shop gave me great ideas for my holiday shopping list, namely my list of things for other people to get for me.

The current temporary exhibition is called “From Degas to Picasso,” and they had some great stuff: not just sketches by Picasso and sculptures by Degas, but drawings by Monet and Seurat, paintings by the great Impressionists and the great Cubists, and this little picture that pretty much blew my mind.

Vincent Van Gogh made this etching of a French doctor named Paul Gachet, who’d taken him on as a patient during the last months of Van Gogh’s life. Dr. Gachet was a great champion of artists and an amateur painter himself, and he gave Van Gogh some etching tools and suggested he give it a try. Van Gogh had never made an etching before, and is said to have been pleased with the results. Look at that, it’s fantastic.

My first attempt at etching resulted in nearly slicing off my own thumb just trying to make a circle.

“You can see the concern in the doctor’s eyes,” said A, as this sentence stopped me in my tracks: “Van Gogh died three weeks after making this etching.”

I could not believe I was seeing a) the only etching ever made by one of the greatest artists of all time b) one of the last things that artist ever created and c) a portrait of a person who was important to the artist and is well-known to enthusiasts and scholars of his work. And in Milwaukee, of all places. Milwaukee!

Van Gogh painted two portraits of Dr. Gachet—one is in the Musee d’Orsay in Paris, the other was sold to a private collector.

A did not believe me when I told her that Van Gogh only sold two paintings during his life. “That can’t be right,” she said.

“Life is cruel and unfair,” I said. Which brings us to Hillary Clinton.

We returned to the Public Market for dinner—excellent falafel pitas, again in Milwaukee,  who saw that coming?

Then we ventured out into the 19 degree weather (that’s -7 in the other one!) and stood in line for a good long while to get in the theater.

I didn’t bring a coat. That’s the only thing I forgot. I brought everything else we could possibly need, but I didn’t think I’d need a coat. In Wisconsin. Oh well.

We finally got in the theater just as I was losing feeling in not one, not two, but all of my extremities, and took our seats wayyyyyy up high in the very beautiful Riverside Theater.

“I’m going to go through all of the stages of grief, but not necessarily in the right order,” A warned me. “So good luck.”

Our moderator was the actor Bradley Whitford, from The West Wing and Get Out and many other fine works of film and television. He was also the villain in the ’90s classic Billy Madison.

Bradley introduced Hillary, and the crowd went wild. People were waving and shouting “We love you!” and A was losing her mind and yelling incoherently and I felt very honored and unworthy of sharing oxygen with Hillary Clinton. Like I needed to hold my breath so she could stay strong and keep up the good fight.

Even Bradley Whitford was overwhelmed by her presence—he struggled to find words and his questions were not that great. Even though he made some good jokes and appealed to the hometown crowd as a Wisconsin native, we weren’t super impressed with him. The guy went to Juilliard, don’t they teach actors to prepare?

“What if they need a new moderator?” whispered A. “A young female moderator who is also a lawyer?”

Hillary, of course, was amazing and capable and passionate and eloquent and everything we need in our leaders. She talked about fighting for healthcare, the fact that we need to do something about the opioid crisis because 90 people are dying a day, and that we need to invest in environmentally sustainable industries before we’re beaten by China and the entire planet dies. She also made some rather cutting points about sexism—namely that for men, success and likability go hand-in-hand, but success makes women unlikable.

Hillary explained that whenever she served others, as First Lady, as a Senator, as the Secretary of State, she had high approval ratings and was well-liked, but the moment she stepped into the leadership ring and sought a position of authority, people turned on her. A man would never be vilified the way she has been.

I believe history will vindicate her in a big way.

In closing, Hillary said, “This country is still worth fighting for,” and for the first time in over a year, I agree.

So thanks, Milwaukee. I hope to return to your excellent cultural attractions and cuisine and sense of hope in the face of despair very soon.

After all, I have to find out what happened to that hunky guy in the Mexican hospital.