I have a cold and that makes me Grinch-like on the best of days, but when A said that her brother and his girlfriend wanted to visit Bronner’s in Frankenmuth during their visit to Michigan, I agreed to go in the hopes that I would get to arrange some decorations into pentagrams or change the letters in “Santa” to “Satan” because I am still a small child at heart who just wants to make my mother proud.

But Bronner’s is not your average Christmas store. Located in Frankenmuth, aka “Michigan’s Little Bavaria” (think the Germany section of the Small World ride, but not as subtle), Bronner’s CHRISTmas Wonderland (yup) is 96,000 square feet of Jesus, Santa, and nothing else. It is the pride and joy of an evangelical family’s corporation that exists for one purpose and one purpose only—to bring Christmas with a capital Christ to all. 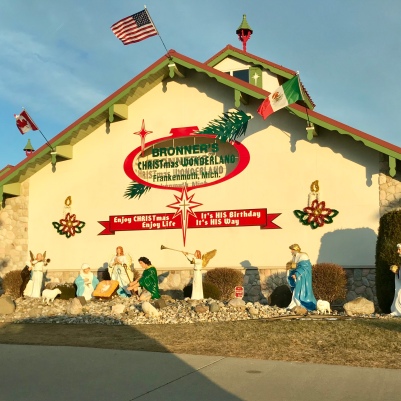 I’m kidding. They’re in it for the money. They sell 600,000 ornaments a year. Jesus would take that money and give it to the poor, right? Does Bronner’s? Nope. They have to pay that electric bill.

Of course, the Bronner folks have every right to make money—this is America, after all—and if they make a fortune off the image of a baby born to refugees and use that fortune to support a regime that murders refugee children, well . . . they have to pay that electric bill. 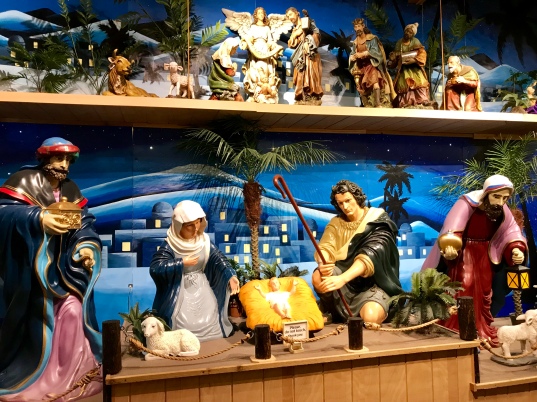 It goes without saying that only the whitest version of Jesus is sold in this store.

A dropped us off at the west entrance. The parking lot was packed, and she claimed she had some urgent emails to send even thought it was the day before New Year’s Eve so she would hang out at a coffee shop until we were ready to go.

She is the smartest person I know.

I ventured in with her brother and his girlfriend and almost immediately lost them. Oh well, I thought, they said they’d meet me by the big Christmas tree.

Two million people visit this windowless Jesus and sparkles-themed escape room every year, and a good chunk of them were in the store with me, buying decorations for a holiday that was only 360 days away. And none of the stuff was even on sale!

The ornaments were pretty fascinating, I have to say. They had every walk of life and interest covered: there were ornaments celebrating nail techs, plumbers, people who donate blood, people who drive RVs, drone pilots, dental hygienists, Bigfoot and even Martin Luther, who would definitely hate this entire store. 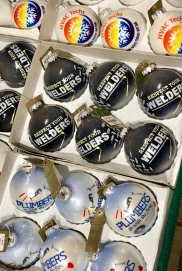 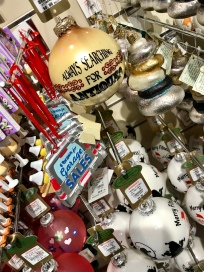 How much would I love to tour this thing with Martin Luther, and then take a picture of his face when he saw his own ornament?

It would probably look exactly the same.

But as I wandered the aisles and watched the delight in people’s faces when they finally found their ornament, the jaunty bauble that meant they too, had a place in Bronner’s wonderful world of Christmas, whether they were a welder or a guinea pig owner or someone who liked garage sales, I realized something. 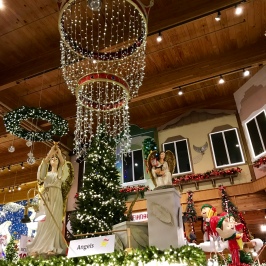 No LGBT section. Not a single rainbow ornament.

This store is run by people who are presenting their idea of a perfect world, a world where everyone loves Jesus and Santa and it’s Christmas every day, and where people like me do not exist.

So there were entire shelves of “Mr. and Mrs.” ornaments and ornaments commemorating engagements, weddings, and anniversaries, but all exceedingly heteronormative. Every ornament had a gown and a tux and that was that, no one else allowed. There were Mr. Fix-It ornaments, but no Miss or Mrs. Fix-It.

And that’s their loss, because all the lesbians would buy those.

I got excited when I saw an ornament of two penguins cuddling, but no, one penguin had a top hat and the other had a hair bow.

At least the penguins had their own designated aisle. So did video gamers, Australians and cats.

Actually, the cat aisle could secretly double as the lesbian aisle, so take that, Bronner’s. 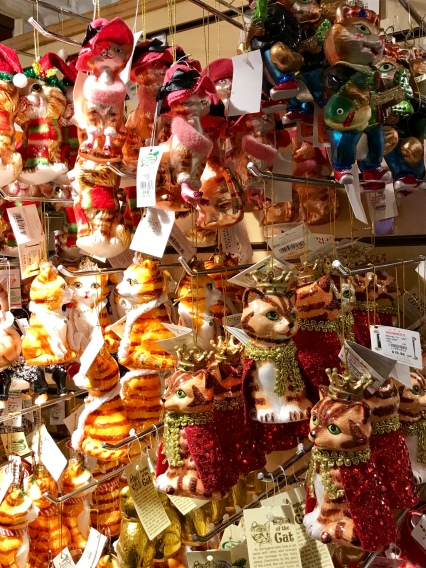 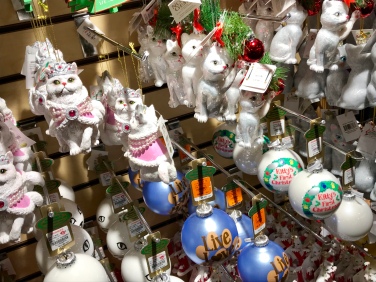 There are worse places to be excluded, of course. And I’m happy for everyone who never expects to find an ornament and then gets one. I mean, accountants have three designs which seems a little greedy, but whatever.

I started to cheer up a bit in the countries section, probably because it reminded me of Epcot. There were ornaments that said Merry Christmas in dozens of languages—even Maltese (a language spoken by half a million people!) and Esperanto (a made-up language that I’ve only ever encountered in the movie Gattaca).

Everyone was represented—Canada by moose and yetis (I do love a yeti!), Italy by wine, pizza and “I ♥ Ravioli” (legit), Sweden by Vikings, China by pandas (imagine that fight!), and Mexico by chili peppers and sugar skulls. A nice bit of pandering to a country whose people are declared less than human on a daily basis by the evangelical-supported regime. 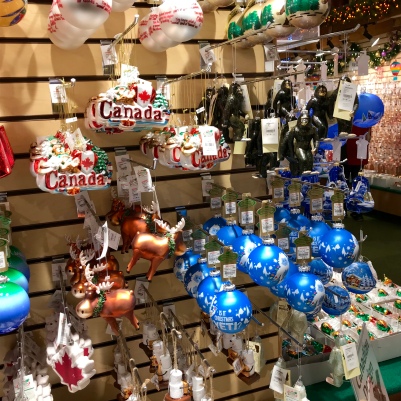 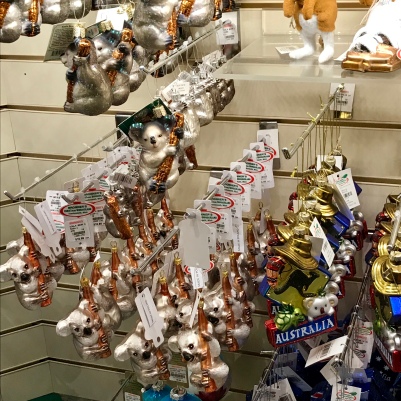 Africa . . . is not a country, but Bronner’s doesn’t care. Nothing to reflect the staggering diversity of traditions and cultures here, take your monkeys and Black Santa and go. 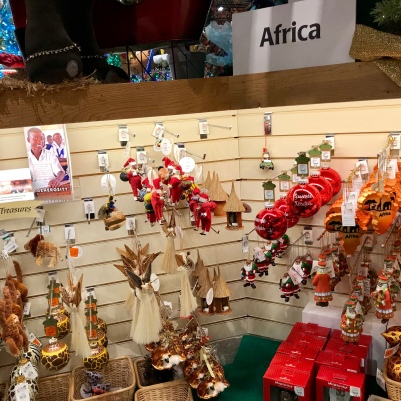 Ooh, what country is this? Never mind, we’re in the pop culture section now. The Grateful Dead bears made me smile—a little bit of rainbow, at last. 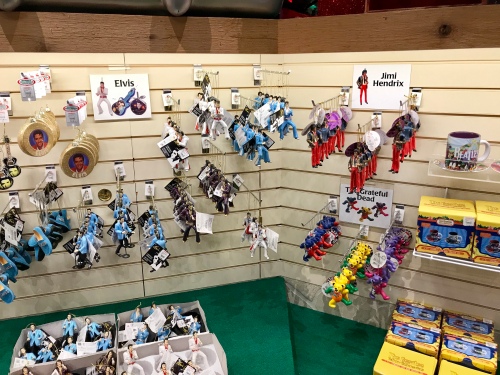 Aww, finally found something that speaks to my family’s culture. 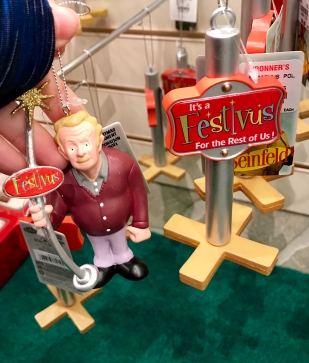 I had traveled the entire store, examined every shelf, and had not found a single whisper of LGBT representation. Nothing against people who speak Maltese (very cool language, it has traces of ancient Phoenician!) but there are way more LGBT folks than people who speak Maltese. Especially in Michigan, which is 5,000 miles from Malta.

Aside from making a perfectly nice lesbian with a cold feel even crappier, exclusion is bad for business. A lot of capitalists are picking up on that. I guess Bronner’s is getting left behind.

My feet were starting to drag. I’d been listening to Christmas carols and cash registers dinging and children melting down for over an hour. Finally, one ornament spoke to me. I had a place in Bronner’s Christmas Wonderland after all.

But I couldn’t justify spending the money. A’s brother and his girlfriend texted me that they were done, and they met me at the only shrine that wasn’t dedicated to Jesus or Santa.

A rolled up and brightly asked, “How was it?” as we staggered back out into the real world, while “Blue Christmas” played and a dozen life-size Santas and Elvis bid us farewell.

On my way out I noticed this picture, which will haunt me forevermore. I don’t know what Mega Jesus is doing peeking into windows at the United Nations, but if I worked there and saw a giant hippie tapping on the window, I’d head right for the exit.

The girlfriend bought three ornaments: a very pretty glass turtledove, a porcelain deviled egg for her mom, who makes really good deviled eggs, and a wheel of Parmesan cheese from the Italy section.

A wanted to know if I’d bought anything. “Didn’t they have any gay ornaments?” she asked with such hope. I said I couldn’t find any.

“Oh well,” she sighed. “Anyway, Jesus was born in April! This is all pagan stuff, so joke’s on them!” 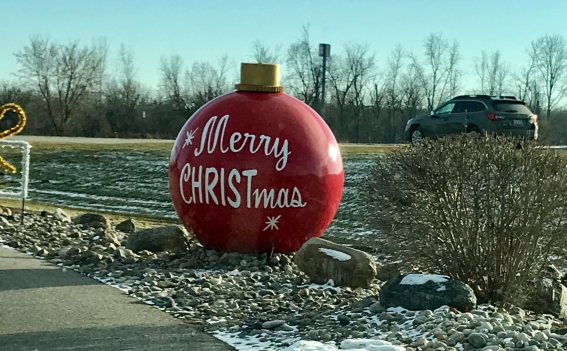