“Welcome! We’re here to celebrate Mozart’s 263rd birthday,” said the man in the dad sweater at the grand piano.

A had whisked me to the Ann Arbor Symphony, which has never happened before, for “Mozart’s Birthday Bash.” To my great disappointment, there was no Mozart piñata or gigantic sheet cake emblazoned with Mozart’s greatest hits in frosting form, but everyone in attendance got a Mozart chocolate. 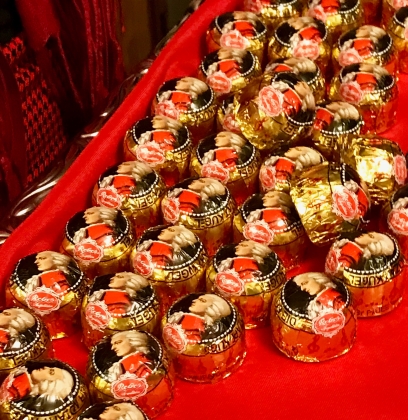 The man in the dad sweater at the piano was just noodling away, effortlessly playing Mozart’s notes squished within notes in a way that told me that he definitely practiced more than twenty minutes a day.

Twenty minutes was my absolute practice limit when I took piano lessons, and yet somehow I never really got that good. I mean, I did teach myself to play Across the Stars, the love theme from Attack of the Clones. I had potential.

The man in the dad sweater told us a little about himself: that when he was young, he practiced two to three hours a day, until he realized he wasn’t taking it seriously enough, and started getting up before dawn to practice for five to six hours a day.

To be fair, at least I practiced more than my sister, who probably practiced five to six hours cumulatively over her entire piano career.

The man in the dad sweater was excited to tell us what we were going to hear in honor of Mozart’s big day: Concerto #9, written when Mozart was 21 (show-off) and the Requiem, 62 minutes of clouds bursting and angels chanting and drums pounding as we march ever closer to death.

I texted my mom, thinking she would appreciate my commitment to classical music after taking my piano lessons for granted for eleven years, and she said, “That Requiem is a good piece, but can you dance to it?”

The orchestra set up, and the oboist (a word I have never written before) introduced the first piece with, “This concerto is going to knock you dead—but don’t worry, it will be followed by a requiem.”

That got a big laugh. I had no idea oboists were so funny.

The man in the dad sweater re-emerged in a slick black suit. He looked like a movie star. Then he sat at the piano and played this ridiculously difficult 30 minute concerto to perfection, yet performed it like he was discovering the piece for the first time.

The pianist got a well-deserved standing ovation and then it was time for the Requiem.

You’ve heard the Requiem before, or at least parts of its eight distinct sections: probably Lacrimosa or Dies Irae. Like all music by the classical masters, it’s in the public domain, so no royalties to the Mozart estate.

The Requiem has been used in episodes of The Simpsons and Key and Peele, the video game BioShock Infinite, that movie Lucy where Scarlett Johansson turns into a flash drive, and The Big Lebowski.

Dies Irae is what you hear in the Pixar short, Jack-Jack Attack, right when the baby bursts into flames after his superpowers are triggered by the babysitter playing him Mozart.

And I know this because I turned to A when Dies Irae began and whispered, “This is what plays when Jack-Jack explodes,” and she said “What?”

And you’ve heard the Lacrimosa (it’s Latin for “weeping”) in a million different places. The Requiem has 167 credits on IMDb, 54 of which are for Lacrimosa.

Mozart’s music has been used in film since 1929. On IMDb, he has 1,507 soundtrack credits, 307 more credits for “music department” and only 2 “thanks,” one of which is a special thanks in the credits for Jack-Jack Attack. That was nice of them.

The Requiem was accompanied by 4 virtuoso opera singers and over 200 singers from 5 area choirs, most of whom were terrified children from 3 different high schools.

I was really impressed with all these kids taking a Saturday night to sing the sounds of angels screaming, and lots of people in the audience around us in the ol’ nosebleed section were pointing out their own kids or grandkids or nieces or nephews. I eavesdropped on a guy who swore on the good authority of a child with a post-2002 name that all five choirs had only practiced together twice.

Now, I love a musical trainwreck more than anybody, which is all that kept me going through eleven years of Christmas piano recitals, and being forced to play only incrementally more difficult versions of Jingle Bell Rock for eight of them, but the choirs blended flawlessly.

Hearing this piece of music the way it was intended to be performed—with a mountain of voices soaring and falling in an instant—is a privilege. Because Mozart died when he was 35, but he knew he was writing music to last forever.

The Lacrimosa contains the last notes that Mozart ever composed. He worked on the Requiem to the very day that he died.

When I was in second grade I tried to take a day off from practicing piano because I had really bad mosquito bites and I couldn’t play more than a couple of notes without scratching my legs.

My mom made me stand up on the piano bench, sprayed down my legs with some kind of chemical antiseptic from the ’80s that was probably flammable and then reset the timer for twenty minutes.