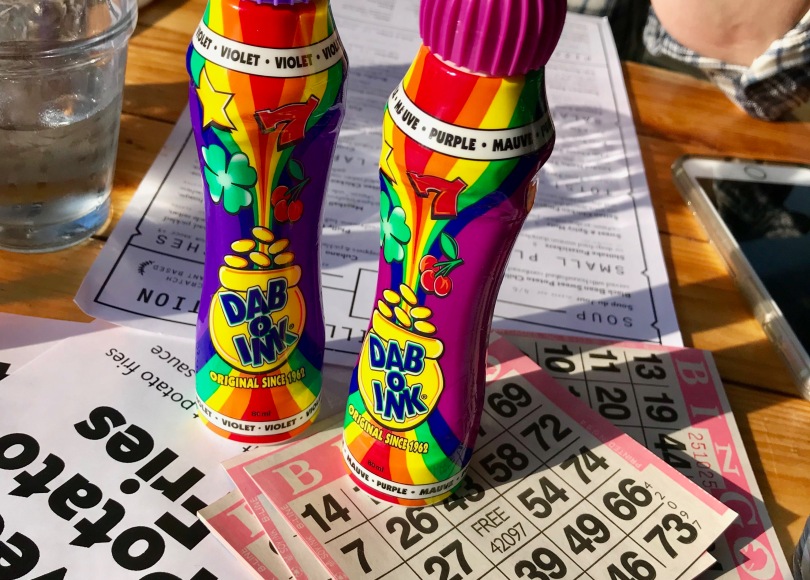 I’m not sure why I shaved my legs right before heading out for lesbian bingo night at our local vegan restaurant, but I love to defy a stereotype.

Of course, I seriously considered sneaking my dog into lesbian bingo, so two steps forward, one step back.

Stella is not gay, but A had to work on lesbian bingo night and Stella needed to have some fun. She put on a flannel shirt and showed up early to get us a table.

That’s a great ally right there.

And the outdoor patio of the vegan restaurant was packed with lesbians. Stella texted me as I was walking over, “There are so many killer haircuts here. I’m so envious.”

It makes my heart grow at least three sizes whenever I see a great lesbian haircut. Not just because visibility is important to me and never to be taken for granted, but because my hair is too curly to ever pull off the undercut look, so I can only admire from afar.

Stella had already gotten our cards and dabbers—she choose pink and got purple for me, because it’s my favorite color, and one of the sweetest perks of having the same best friend since infancy is that they remember your favorite color even though the last time you discussed it was in the middle of third grade.

Is it weird that in third grade I thought I would marry a boy yet my favorite color hasn’t changed?

Anyway, the patio was packed with lesbians, and the MC picked up her microphone to get the game rolling. She was wearing a T-shirt that said “DYKES IN SPACE” and addressed the crowd as “Sisters!” and I was ready to follow her into battle before she’d even explained the bingo rules.

My year was already made and I hadn’t even gotten my vegan tacos.

Is this how people who love sports feel all the time? That sense of euphoric camaraderie just from yelling your team’s name? It’s great. And people passing by on the sidewalk were peering in like “Did all those people just scream ‘Lesbo?'” and then shrugged and continued on their way.

I love this town.

The first game was called “The only straight thing about me is my bingo card!”

Stella and I clinked dabbers and got down to business.

The MC’s wife assisted her in calling the numbers. B numbers were called as “Butch” so B9 was “Butch niner!”

Stella and I got close to a bingo, but another lesbian got there first. “LESBO!”

The MC yelled, “We have a lesbo! Lesbo verification!” and her wife checked the card. “We have a verified lesbo!”

Each winner had to answer an innocuous  “Would you rather?” question before receiving their prize.

The answer was, of course, “Ellen Degeneres, the OG lesbian,” and the lesbian received her prize: a framed photo of Kate McKinnon.

The next game was called “I’m friends with all my X’s.”

As the MC explained, “Who else is going to watch your dog? She already knows the cat!”

Getting a perfect “X” on a bingo card is really hard. Neither of us got close and not for lack of focus. Stella and I were barely touching our food, we were so intent on winning.

This was more than a game. This was lesbian bingo.

“We have a lesbo! Whitney Houston or Dolly Parton?”

The prize was a roll of duct tape and a carabiner, aka “the lesbian starter pack.”

The next game was called “The L Word,” after both the objective to get an “L” on the bingo card and the TV show, which as the MC explained, “none of us could relate to even though it’s all about lesbians!”

I got within one number of a win, and I was on pins and needles.

“Now we pause for the rolling of the ovaries!” said the MC, as her wife rolled the little bingo cage. Stella and I both audibly deflated and stole the moment to grab a bite of our vegan tacos with jackfruit and imitation nacho cheese like we were fueling up during a marathon.

We also occasionally paused because someone would wander on to the patio looking for the meeting of vegetarians that was also happening that evening.

“Hi! Are you a vegetarian or a lesbian?” said the MC over her mike. “Vegetarians are inside and lesbians are outside! Not that you can’t be both! We’re very inclusive here!”

When someone else yelled “Lesbo!” I was slightly crushed.

If you had a time machine and used it to visit me at pretty much any point in my existence, I would have been petrified of someone screaming “Lesbo!” in my general vicinity. And now, I was relishing even the possibility of yelling it loud and proud for all my fellow lesbos to hear, and weave through the crowd with all eyes on me to receive a shower caddy and a picture of Ruth Bader Ginsburg saying “I’d like to court you.”

The question for the winner was “Beyonce or nobody else, because nobody’s as good as Beyonce?”

There were actually a few winners for that one, and the MC gleefully announced their prizes: a Mona Lisa mug containing a magnet of “my favorite thing, a man crying,” a bunch of 2nd and 3rd place ribbons “because we’re all winners,” Wonder Woman glasses, a “Nevertheless, she persisted” T-shirt with the sleeves cut off, a tie-dye kit “so now you’re on your way to being a super lesbian!” and finally, a roll of wrapping paper covered in the name Janice, “so if you meet someone named Janice you’ll be able to take that relationship right to the next level!”

The final game was the Abby Wambach—”because she covers the whole field”—and as any bingo aficionado will tell you, a cover-all game is the hardest. And we only had two cards each! The MC said more than two would be heterosexual privilege.

“Let’s win this,” said Stella, and we clinked dabbers again.

Seriously, is this how people who like sports feel all day? Like you’re making life or death decisions and fate is pounding down your door even though you’re sitting in a chair eating gluten-free nut-free vegan Funfetti cake?

A cover-all game is the longest game in bingo, and the patio quieted to a low hum as everyone concentrated on their cards. Stella and I were in such a state of silent focus that to anyone watching, we might have looked like we were in the middle of an intense argument and stewing angrily at our menus, instead of fiercely willing our bingo cards to display the correct set of numbers so we too could go home with a Golden Girls coloring book.

Right as we both hit a hot streak some straight hipster couple interrupted the game to ask where to find the vegetarians. Stella and I groaned in frustration.

“Weave past all the lesbians and go to the right,” said the MC.

I was within two numbers of the Abby Wambach.

“That’s why we’re best friends!” said Stella, and she’s right. The universe was just reminding us of our friendship’s value by giving us mutually narrow bingo defeats.

The final question was “Thelma or Louise?” and the final prize was a framed photo of Michelle Obama. The lesbian who won it was so moved and ecstatic that she actually hugged the picture.

Honestly, I was happy for her. A win for one of us is a win for all of us.

The MC thanked us for coming and said, “Tip your servers well because they work really hard—it’s only that guy’s second night and we threw him into the pit of lesbians.”

She added, “You know, when you see a sister on the street, say hello! I always do. My wife thinks I’m weird for smiling at total strangers, but it’s important for us to stick together, right? Sure, I’ve called a couple of truckers ‘sister’ but I err on the side of lesbian!”

I left with a takeout tofu meatball sub for A, purple ink all over my hands, and a renewed sense of hope.

“Let’s keep this party going!” said Stella. “We should just drive around until we find another bingo game. There’s got to be a bowling alley or some Elk’s Club that’s holding one tonight.”

Once you’ve screamed your team’s name while surrounded by your tribe, you can’t settle for anything less.