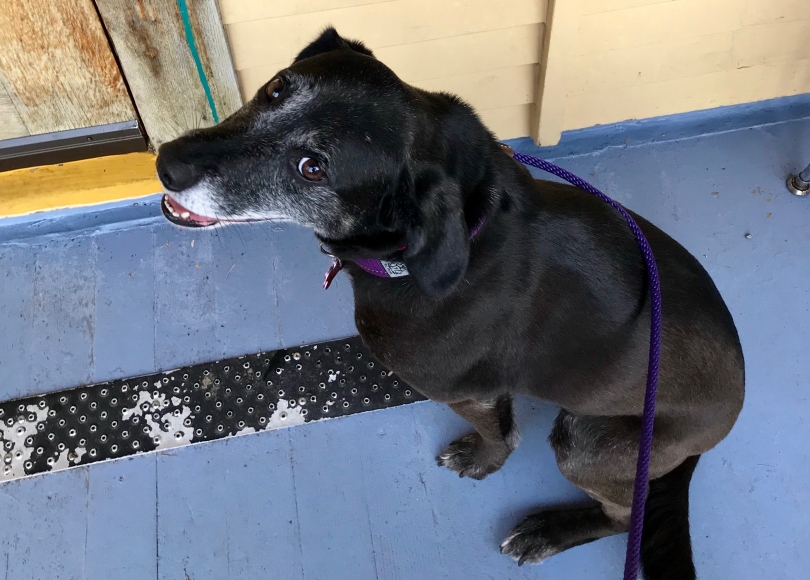 Now that I’ve had my dog, Lumi, for a couple of months, I thought I’d sign her up for obedience classes. She’s never had any training, but she’s so smart and eager to please, I figured it would be a fun bonding experience for both of us.

Naturally, my mother had many, many thoughts on when and where and how to sign her up, and since she brought it up only every single time we spoke and experience has taught me well, I signed Lumi up for exactly what she recommended.

It seemed like a great class, at a place I already like and trust, with top-notch instructors. I went to the first session—the humans-only orientation—and learned everything I needed to know about what we were going to be doing, what equipment we needed, even the best kind of treats to bring (you want soft ones so you can break them up!).

I even got to know my fellow classmates—as did the instructor, who went around the room and asked about our dogs, their sizes, how much training they’d had, if they were good with other dogs . . . this was clearly not her first rodeo.

So when I rolled up the next week with Lumi and saw two gigantic dogs walking in with two people who were not at the orientation, I thought “Hmm, that might not be good,” but assumed I was having a “Knock knock, who’s there? Anxiety!” moment and pushed it aside.

I grabbed a spot at the back of the room—between a puppy that was delighted by the sheer wonder of being alive and a Chihuahua/Jack Russell mix that was clearly counting down to nap time.

Lumi was anxious. She started whining and clinging close to my leg, intimidated by being in close quarters with seven other dogs. Fortunately, five of them were about her size or smaller. Next to the puppy was a sweet little Lab/Corgi mix named Maddie, and next to Maddie were the two big guys.

Something told me I was lucky to get a spot away from those two dogs.

The people who weren’t at the orientation were an older woman and her adult son—the son was handling a German Shepherd and the woman had a Doberman. Each dog looked to be about one hundred pounds, easy, and the Doberman was the biggest I’d ever seen. This dog was solid muscle and in a seated position, his head came up to the woman’s chest.

I’m not knocking her age when I say this woman clearly could not handle this dog. If she’d been twenty-two or a dude, I would still say this dog was way too big and powerful relative to the size of the human holding the leash. Only someone built like Jason Statham could safely handle this dog.

So the instructor goes up to these people—”Hi, you weren’t at the orientation, tell me about your dogs”—and all I can hear is that the dogs have had no previous training, despite having been with this family for a few years, and the Doberman was a “former fighting dog.”

“Uh-oh,” I thought. I know former fighting dogs can be total sweethearts, but . . . this dog was not giving off sweetheart vibes.

Clearly the instructor was as wary as I was, and she stayed close to these dogs for the whole class. Their owners needed to be briefed on everything they’d missed at the orientation, after all, and from what I could overhear, they didn’t seem to know what they were doing with these dogs at all.

(Not that you have to be a certified expert to be a good dog owner, but if you’re getting a dog that weighs as much as an adult human and could easily hurt you or someone else? You better know your shit).

Each session of this class is only an hour long, and the instructor spent 90% of the hour bringing these people up to speed and working with their dogs. She didn’t even have time to do a quick sweep around the room to check in with everyone else, so I spent the whole hour working with Lumi on my own, unsure if I was doing anything right.

Lumi, for her part, had enough around the forty-minute mark. She was getting a little irritated with the puppy next to us. He was all big paws and spindly legs and he wanted to say hello to me or Lumi or the floor every two seconds. Lumi never growled or barked, but she did shoot him some intense side-eye.

She’s already taking after me.

We made it to the end of the hour, and the instructor thanked us all for coming and asked if anyone had any questions about their dogs—training, behavior, whatever, she was happy to help. The lady with the Chihuahua mix raised her hand, and the instructor came over to our side of the room for the first time.

And the second her back was turned, the Doberman lunged for Maddie.

It happened really fast. The Doberman just dove for this little dog and yanked the woman clean off her feet. She flew a good eight feet, from one corner of the room to the next, and slammed to the floor on her side. And because she was trying to hold on to the leash, she couldn’t stop herself or change the trajectory of her fall at all.

She went down really hard—hitting her head, shoulder and hip against the solid tile floor. She was only a few feet away from me, curled on her side, still holding the leash, and she wasn’t moving.

The instructor managed to wrangle the Doberman back to his corner of the room. Everyone audibly breathed a sigh of relief. Things were back under control.

And then the Doberman ducked out of his collar.

(Hi there, it’s hindsight speaking: if these people had attended the orientation, they would have gotten a crystal clear lecture on how tight a dog’s collar should be, how to check if the collar is tight enough, and received both a verbal and written recommendation for martingale collars, which are specifically designed so dogs can’t duck out of them).

So now this Doberman was loose. No collar, no leash. And we were all trapped in this room with him. This pissed off, bodybuilder muscled dog is barely a leap and a bound away from my sweet little Lumi, who only just got over her fear of basement stairs.

And I thought, “Oh hell no. Lumi did not escape from Mississippi to deal with this bullshit.”

Without taking my eyes off the Doberman, I picked up Lumi and started backing up towards an emergency exit door that was only a few feet behind me.

I’ve seen Jurassic Park about a thousand times, and it’s given me the survival skills to make it in this world. Always assume any fence will electrocute you, stay prepared for power outages, wear good running shoes in theme parks and never, ever trust the jolly head of a major corporation.

Just like Lex and Timmy were trapped in the kitchen with the raptors, I was trapped in an obedience class with this Doberman. The plan was instantly clear—when he broke towards me, I would dive out the door with Lumi and slam it in the Doberman’s face. Just like when Lex saved Timmy while their negligent grandfather ate ice cream with Laura Dern, the lucky bastard. 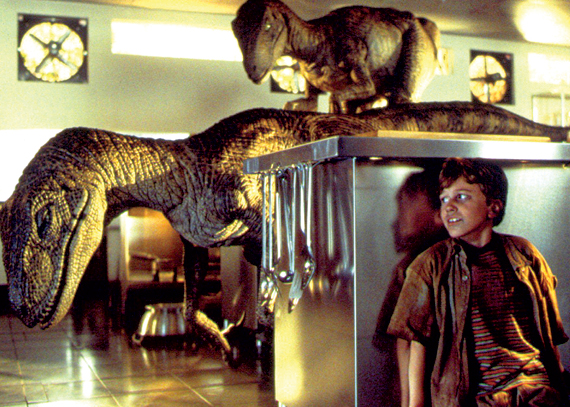 Luckily, the instructor was able to grab the Doberman and get his collar back on. He was probably only loose for a few seconds but it felt like much, much longer.

All of the other dogs, even the puppy, were completely still and quiet at this point. They knew something bad was happening.

The instructor quickly took charge—she really was a pro and handled everything perfectly. She told the son to take both the Doberman and the German Shepherd to the car, crack the window, and come back to take care of his mom.

Once the dogs were gone, the woman started talking. She said she was fine, and just needed a minute to get up. Maddie’s owner brought her back from the hallway, still carrying her. Poor Maddie was so scared that she’d urinated all over the floor, but she wasn’t hurt.

The woman slowly got up and apologized, asked if Maddie was okay, claimed that the Doberman was usually so well-behaved, etc. I was watching her for signs of a concussion or broken bones but she seemed okay, just a little shaken. The instructor was understanding but firm—when the son returned, she told them that she’d get them on a list for a different class that would be a better fit for their dogs. She also mentioned that the Doberman had gotten out of his collar and recommended they get a martingale before attending their new class. They apologized again and left. The instructor made sure everyone else was okay and then gave Maddie lots of treats in the hopes that she wouldn’t be too traumatized to come back.

I could’ve use an ice cream or something myself.

We all filed outside in silence, a good half hour after class had officially ended. I got Lumi in the car and said, “So, that was your first obedience class!”

She looked at me like, “That was much more of an emotional coaster than I expected!”

Now, for added anxiety, I told this story to my parents as we hurtled down the freeway in the dark of night towards the mysterious second terminal of our airport, which nobody knows how to find because it occupies some kind of floating pocket universe that regularly changes location according to which freeway exit is most inconvenient.

So picture me gripping the wheel of my dad’s car, which I hate driving, talking my parents through this whole drama as my mom sits at the edge of the passenger seat and yells right in my ear, “She FELL?! Oh my GOD! Oh NO!” and my dad whispers from the backseat, “Was Maddie okay? I’m shaking like a leaf! I thought the terminal was the other exit!”

When I got to the part about the Doberman getting loose, my mom actually held her head in her hands and moaned, “This is all my fault!”

Impressed that she had made this about herself in record time, I said, “How could this possibly be your fault?”

“I told you to take this class! I told you where to sign up!”

“Yeah, but you didn’t know this crazy dog would be in the same class!”

My mom dramatically pulled at her hair like she was really going for that Oscar and swooned, “And it was Lumi’s very first obedience class! She finally gets out of Mississippi and look what happens!”