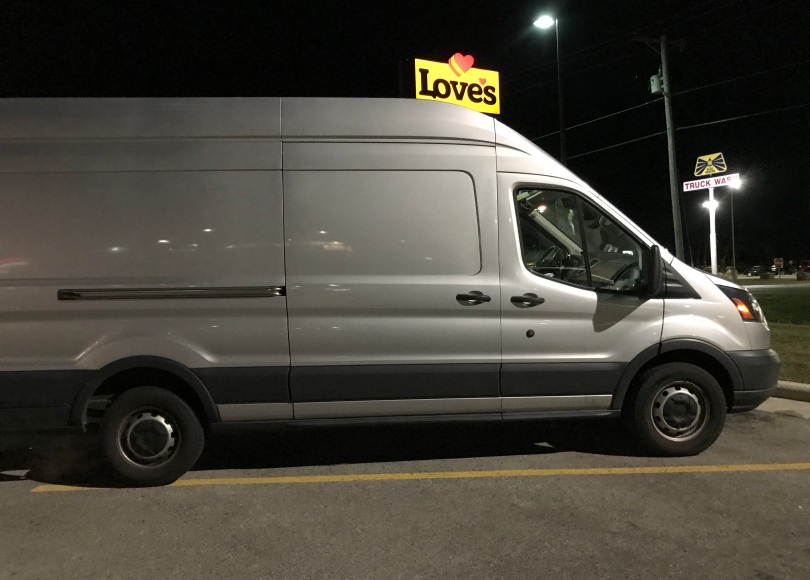 Last Saturday, I drove to a rest stop at midnight to pick up a stranger.

I waited in an empty parking lot for a white unmarked van to arrive, hoping that I wasn’t making a terrible mistake by bringing this stranger into my home where she could cause all kinds of destruction and stress out my cat.

The stranger was this young lady.

I didn’t think I’d ever find another dog after my last dog, the greatest dog of all time, ever, passed away a year ago. And although I’ve diligently kept an eye on my local shelters for months, the fact that they couldn’t guarantee that a dog would be good with cat roommates was too big of a gamble to take.

But then I stumbled upon a Petfinder listing for “Dixie,” a 4 year old Lab mix from Big Fluffy Dog Rescue, who was in a foster home peacefully co-existing with cats, and had all the qualities that I missed having around—mellow, sweet, and according to the listing, “ready to find her happily ever after.”

I didn’t want to get my hopes up. Such a cute dog with so many desirable traits would be adopted immediately. Still, I applied to the rescue agency and got a call from a super-nice coordinator who informed me that Dixie was still available. She went over my information and as a way to get to know me, asked what I like to do on the weekends.

“Well, my partner and I like to explore around town, go kayaking, take long walks,” I said, resisting the urge to add “getting caught in the rain” to the list.

“Girlfriend, yeah,” I said, with great confidence, because if there ever was such a thing as a homophobic dog rescue, it would last about three hours, because who adopts all the dogs?

(Lesbians adopt all the dogs!)

“Oh good,” said the coordinator, laughing a bit. “I was worried to tell you the next part, which is that the dog is afraid of men.”

Now it was my turn to laugh. “That won’t a problem for me!”

“We were actually hoping to adopt her to an all-female household,” she added.

“The only guy around here is the cat,” I said, and we both laughed.

After the call, I felt really good about my chances, but I still had to wait two days to get formally approved.

“What if I’m not a good fit?” I worried. “What if she’ll be happier with someone else?”

“Of course you’ll get approved,” said A. “They want an all-female home. How many lesbians do they have lining up for this dog?”

When the coordinator emailed me on a Wednesday night to say, “I’m ready to go if you are,” I agreed without hesitation. Of course, once everything was signed and sent off, I had a moment of “Wait a second, what did you do.”

I don’t know anyone who has committed to a pet sight unseen.

I’ve never even adopted a goldfish that I hadn’t met before.

But I trusted the coordinator, and she was very upfront with me about the dog’s potential drawbacks. She had already been adopted once and then returned, and had been in her foster home for almost a year. Potential adoptions had fallen through, possibly because of the no men thing.

Big Fluffy Dog Rescue had pulled her from a shelter in Mississippi a year ago, and she was believed to have been a breeding dog that was dumped after at least four litters of puppies. There’s a scar on her abdomen that might be from a C-section. She didn’t know what to do when put on a leash.

And she’s afraid of men for a reason.

So for two full days and three sleepless nights, I worried, because that’s the thing my brain does best. What if the dog didn’t like me? What if she didn’t smile like my old dog? What if she hated the cat? What if she hated my dad, and then I couldn’t leave her with my parents if A and I had to flee to Canada in the middle of the night because of reasons?

And since when did Etsy start offering a billion different dog ID tags? How was I supposed to pick just one? And then once I picked one, how would I choose between all twenty-five offered fonts? Especially when I hadn’t met the dog yet and didn’t know her style or what kind of story she wanted to tell with the font of her ID tag?

(Spoiler: I got a tag from the machine at the pet supply store. No font choices, only three colors, and the machine yells at you while it works. Exactly my speed).

On Saturday morning, I got an email with my tracking information. This organization is run entirely by volunteers, who spend their weekends ferrying dogs all over the country to fosters and adopters in multiple states. According to my email, a big white van was on track to leave their headquarters in Nashville in the morning, then head for a Best Buy in Kentucky, where it would drop off dogs to be fostered and pick up others to be adopted, then continue to a Waffle House in Ohio, where it would pick up my dog and drop off two newly rescued dogs to her foster family, then on to a Subway in Indiana where another dog would be dropped off to an adopter, and then finally to a rest stop near the Michigan/Ohio border, where I would meet my new best friend.

If she liked me.

I spent the whole day worrying, reorganizing a bag of treats and toys a dozen different ways,  and ruminating about names.

A attempted to be helpful. “Name her Ruthie after RBG! Then if she dies, the dog can take her place on the bench! Or name her something French! Like Roxanne! Then I could call her ‘ROXXXXXXANNNNNNE’ and then you’d say, ‘You don’t have to put on your red light!’ WHAT’S THE NAME OF THE SKATER WHO SKATES TO THAT?”

“The Canadian ice dancers skate to that,” I said.

A swooned, “THEY SHOULD GET MARRIED!”

“They say they’re not dating!”

The van was supposed to arrive at my stop around 6, but transporting a van full of dogs can be tricky, so the time got pushed and pushed until my pick-up time was 11:45 PM. The rest stop was an hour’s drive away, so I headed out around 10:30, just to be safe.

My dad, who is a great dad, possibly the best dad, texted me, “I’m driving with you.”

My dad, who DVRs The Price is Right every day to watch before he goes to bed at a normal hour, said, “No, I think I’ll go with you to the rest stop at midnight to meet the big white van.”

I texted Stella before heading out. “What if she just tolerates me?” I said. “Or she misses her foster family and hates being stuck with me? What if my dad scares her and we start things off on a bad note?”

“Your brain is being a dick,” said Stella. “It will be fine. You’re rescuing her!”

We pulled into the rest stop around 11:15. It was well-lit but we were the only car in the parking lot. A truck rumbled by every few minutes, but there were no big white vans in sight.

I went into the gas station to get a Diet Coke for my dad, and the employees all turned to look at me, one by one, like they were trapped in a time warp and I had accidentally broken it by stepping inside.

What if this rest stop only exists between 11 and midnight every night, I wondered, and I get stuck here and then my dad has to take the man-fearing dog?

The cashier smiled at me. “You have a good night now!” she said. I said “You too!” and hoped that the night would end for her eventually and she’d be freed from the gas station time warp.

And then, a van pulled in.

I nervously got out of the car, and was met by a very upbeat and excited person who was much friendlier than I would ever be after twelve hours of driving. She opened the van door, where there were about a dozen kennels, all empty, except one.

My dog scratched at the door of her kennel to say, “Let me out!” And then she hopped down and went right to me, tail wagging and smiling. She was perfect.

I thanked the driver multiple times and she petted the dog good-bye. “She’s been my buddy!” she said. “She’s a sweet girl.”

And then she drove away, and I had a dog. She got in the car with no problem, and immediately licked my dad’s face.

“Guess she’s not afraid of me!” he said.

Even though she’d spent over four hours in the van, she happily wagged her tail and watched out the windows the whole way home. She even licked me a few times as I was driving, to help me stay awake.

When we crossed into Michigan, my dad said, “This is it! Your forever state!”

But everyone quickly settled down, and it’s been smooth sailing ever since. Lumi is a very happy girl (I wasn’t going to keep the name “Dixie,” are you kidding me?).

Her foster family did an incredible job taking care of her—she’s in great shape, at a perfect weight with a smooth and shiny coat, and walks great on the leash.

In her previous life, she clearly had bad experiences with basements, and she freezes at the sound of footsteps on stairs. She gets nervous around men in big coats or hats. My dad wore his giant parka to greet us at the door the other day, and she barked at him in fear—but once he quickly took it off, she recognized her midnight rescue driver and happily wagged her tail.

We’re building her confidence by taking her to the park, the pet supply store, and out for ice cream. She’s made lots of new friends, and everyone loves her—even the cat. He welcomes her back from walks with a friendly nose nuzzle and has only stolen her bed one time.

I told my sister how nervous I was at the pick-up.  “It seems so silly now,” I said, “but I had no idea what to expect when the van door opened.”

“I know!” said my sister. “She could’ve been a Russian dwarf!”

She added, “I don’t think you can say ‘Good girl’ enough. Not easy to have a dog with a past, but it’s the beginning of a beautiful life!”