“Hey, can I borrow your extra toothbrush to recondition some leather?” said my significant other.

When you’re stuck indoors and there’s no sunlight for weeks, you can either go crazy or do some science.

My mom did both when she became obsessed with a car parked next to hers at work that appeared to never move. Over a period of several days, she stuffed twigs underneath the wheels to see if they broke, checked the temperature of their hood whenever she pulled in, and gave us all daily updates whether we wanted them or not.

“Cold as ice!” she told us, with no context needed.

“That doesn’t tell you anything, does it?” said A.

My mom replied, “You need to watch more police shows.”

I decided to take the plunge into the world of savory baked goods by trying a couple different recipes for gözleme, a Turkish flatbread that can be filled with pretty much anything—meat, veggies, herbs, cheese, even seafood.

I do love a stuffable bread.

I’m a bit nervous about frying things, since my stove may be sentient and does not like me, so I started out with a recipe for baking gözleme. The recipe called for lamb, garlic, and ricotta cheese, but I improvised my own filling that swapped in sweet potato and onion instead of lamb, topped with a handful of crushed mint and a sprinkle of genuine Turkish chili powder.

The filling was tasty, and the bread cooked fine, but it was pretty dry overall and the flavors didn’t mesh together quite as I’d hoped. 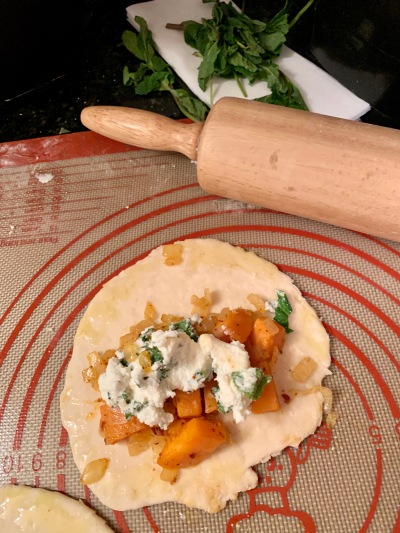 So it was time to fry. I dug my wok out of the back of my cabinet (seriously, I never fry things), and followed a different recipe which called for a spinach/feta/mozzarella filling.

The optimist part won out.

Of course, I added onions and Turkish chili powder to my filling, and while I definitely overstuffed these suckers, they fried pretty well.

I like to think I earned a little respect from my stove.

I could only eat half of one gözleme before the optimist part of my brain said, “Oh no, we messed up, too much cheese,” and the anxious part said, “Dude, I told you,” but it tasted pretty good—especially with the chili powder and a side of honey for dipping.

Not bad for a cold winter’s night,  watching the snow fall while A polishes her leather bag from eBay via 1970s Russia with a toothbrush from my last dentist appointment.

“Oh my god, it even smells like the ‘70s…like LEATHER! Ooh, it comes with a Russian pencil sharpener!” 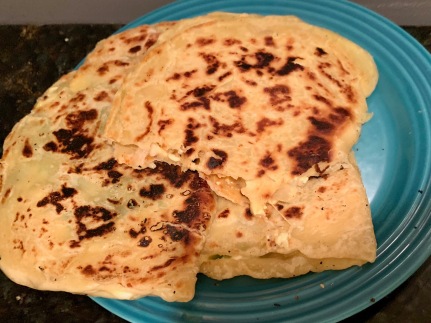