It’s already holiday cookie season at our world-famous food emporium, and for two years I have tried and failed to get a spot in the Christmas cookie classes—they teach 95 classes during the holiday season and they all sell out almost immediately. In fact, the first ones aren’t until around Thanksgiving and they’re all sold out as of August.

How to get over that little hurdle? Take the Jewish cookie class in September!

My mom, sister and A all joined me for this one. I’ve been telling them to take a class with me for two YEARS and I finally bagged them with the promise of dozens of cookies to take home and eat at their leisure instead of duking it out at the feeding frenzy that ensues whenever I come home from my classes.

Remember when I made kardemummabullar (Which I spelled right ON THE FIRST TRY!) and it was huge hit? I made a batch recently and my mom actually met me in her driveway, grabbed the bag of kardemummabullars through the window of my car and ran into the house.

There were only seven people in the class, three of whom were with me, so we had lots of room to work. We were joined by a very nice lady and two friends who had known each other since they were law school classmates in the ’70s. One was Jewish, one was Catholic and both were adorable badasses.

Our instructor was very sweet and knowledgable and told us all about making Jewish cookies with her grandmother as a little girl. The lawyer asked if anyone else besides herself and the instructor was Jewish.

Cue awkward silence until I pointed to my sister and said, “Together we count as one!”

My mom helpfully added, “My husband is Jewish but he just wanted to eat the cookies.”

Our people defuse tension with humor! And delicious baked goods!

Our first recipe was rugelach, which translates to “little horn” in Yiddish. Rugelach dough does not contain any sugar—all of the sweetness comes from the filling.

“I don’t think I’ve ever made dough before,” said my sister. “But I’m really good at following directions.”

The instructor turned on some music while we mixed our dough, and I heard the unmistakable dulcet tones of the Funny Girl herself.

“Yeah!” said the instructor. “I wanted to start us off with a strong Jewish woman! This is The Marvelous Mrs. Maisel Spotify playlist.”

My mom actually cheered. She loves Mrs. Maisel so much that she live-texted the Emmys whenever they won something, and she never fails to bring up which of the actors are actually Jewish even though she loves all of them equally, and isn’t Jewish either.

Once the dough has been chilled, you roll it out and slice it like a pizza and roll up the pieces—ideally all the same size, but no one in my family had the spatial skills to pull that off.

The instructor was so kind and encouraging though, she just said “Put the smaller ones in the middle and the bigger ones on the sides,” so they would bake evenly.

“So put the bigger ones in the middle?” said my mom.

“No, put the smaller ones in the middle, so the bigger ones can protect them!” I said.

The instructor gave us this piece of wisdom as Barbra sang us through our cinnamon topping stage: “Cooking and baking are like skiing and snowboarding. You’re getting to the same place but in a different way. And most people prefer one or the other,  it’s rare to be good at both.”

Hamentaschen means “Hamen’s pocket,” a reference to the evil vizier who ordered all the Jews in the Persian Empire to be killed in the 4th century BCE, but his plan was thwarted by Queen Esther on the very day it was to be carried out (cutting it close, girl!), and that day is commemorated by the holiday of Purim.

I hope that’s right. Rugrats never covered that one.

“There are a lot of bummer holidays in Judaism,” said our instructor. “Purim is one of the few that’s actually fun.”

My sister said, “I think I should start celebrating Jewish holidays because we get like three floating holidays a year at work. We already get Christmas and New Year’s, what else am I supposed to take off? Arbor Day?”

You can use any preserves as the filling, but we used apricot, which tasted heavenly. Folding them is easy, you just brush a ring of water along the edge and pinch them into a triangle. 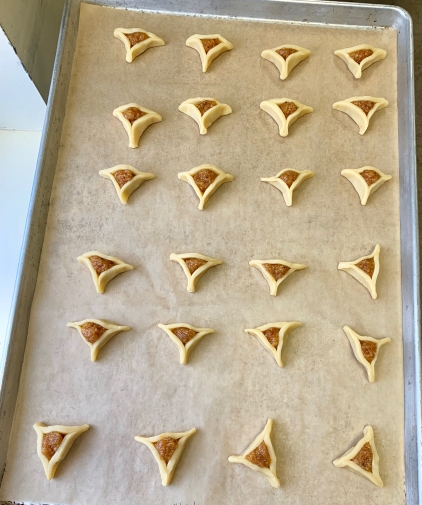 “You can use butter but water is cheaper,” said the instructor. “We are Jewish!”

She looked a little worried that she’d offended us but I thought that was really funny, and if that line is in a future Marvelous Mrs. Maisel episode, I will sue them on her behalf. The two lawyers could help me.

Mandelbrot means “almond bread” in Yiddish, but if you Google “Mandelbrot” you will get results for the Mandelbrot set which is a complex mathematical concept that expresses itself in trippy screensaver images, so be careful.

Mandelbrot is also known as the “Jewish version of biscotti.” Biscotti means “baked twice” so guess what making mandelbrot entails? 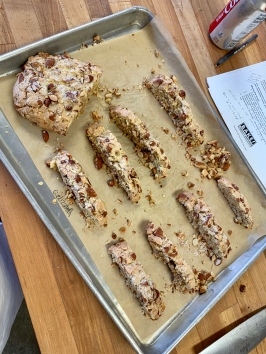 We’re double baking this sucker. The hardest part is slicing the roll after it comes out of the oven and not sneaking bites of it before it goes back in.

All I wrote in my notes for this recipe was “Nutsaw!” and I think that was to remind me to use a metal pastry scraper to cut the roll into pieces. That makes sense, right? Those nuts were tough!

I definitely wrecked a slice or two and had to eat it just to preserve my own dignity in front of my family.

Before our cookies were even out of the oven, my mom and my sister were hatching plans to make these cookies again and all the different fillings they could try, while A just laughed at my dumbfounded expression when my sister nudged me and said, “Why didn’t you tell us to take these classes?!”