I have a lot of anxiety about going to the doctor. I was particularly anxious about my most recent check-up as I had to get my blood drawn, and I haven’t had my blood drawn since second grade. Why? It’s not important.

So Stella and I planned to hit up the Ann Arbor Art Fair right after my appointment, which was a great idea since the shuttle stop was right across the street from my doctor and nothing soothes my frantic brain like “Only a few minutes until you get to browse some artisanal ceramics!”

Of course, the very last thing I had to do at my appointment was get my blood drawn. I was so close to the door. 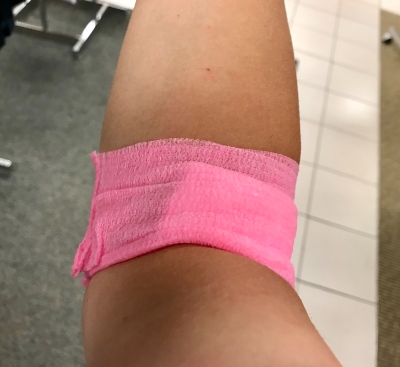 I could’ve just bolted. But no, I had to be an adult. I nervously babbled the whole time—”Just so you know, I’m not going to look or anything because I’m really nervous around needles and the last time I got my blood drawn was when I was seven and some lady held me on her lap and fed me those Valentine’s hearts with the words on them while I cried and I still can’t eat those without feeling sick and oh you’re done already?”

Who knew phlebotomy had advanced so much?

I floated out of there on wings of endorphins and met Stella at the shuttle—along with everyone else in the county.

The Ann Arbor Art Fair is no ordinary art fair. It’s actually four decent-sized art fairs combined into one mega-art fair that consumes over 30 city blocks. Thousands of people descend upon downtown and if you’re not prepared for the sweltering heat, wall-to-wall crowds, and the gladiator battle for parking, you’re going to get chewed up and spat out somewhere near the mixed-media installations.

Stella and I always pre-game by analyzing the official artist line-up and charting a course ahead of time. We knew we wanted to see certain artists that we’d bought from before, a few new ones that caught our interest, and I always try to see every wildlife or plant photographer because that’s just who I am as a person. Stella goes for anyone doing any kind of classic rock-inspired art or industrial chic. So we had our work cut out for us.

It started raining while we were on the shuttle bus. Most art fairs would suffer a lower turnout because of bad weather, but rain only makes the Ann Arbor Art Fair stronger.

Stella and I had umbrellas, hats, sunscreen, semi-decent shoes, and water. This was not our first rodeo. The bus driver dropped us off with a cheery farewell—”Stay dry, stay hydrated, and don’t spend more than you can carry!”

We popped our umbrellas and headed into the fray. Almost immediately I saw something I never knew I desperately needed but could not justify buying even if the world was ending—stone sculptures made of real fossilized leaves. It’s everything I love! Giant plants and rainbow color schemes! There was a little sign that said “Please touch—they like the attention.” I also like attention! I wanted all of them. But I would have had to pawn a pet to buy just one, plus I could never get this giant leaf back on the bus. 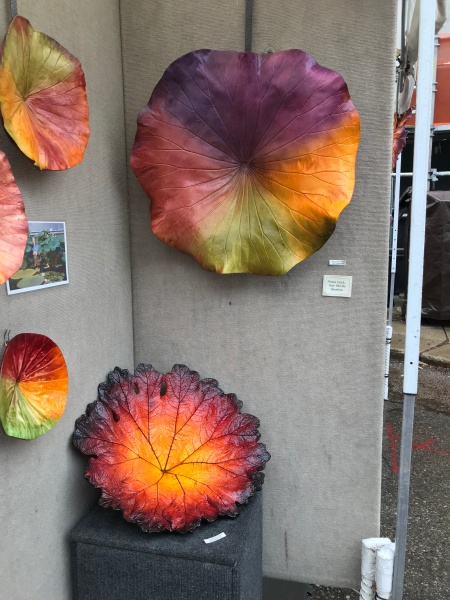 The best part of the art fair is the people/dogwatching. I saw several dogs in raincoats and at least four in strollers—one dog was sharing a stroller with a baby, and this delighted us (the baby did not look quite as delighted).

The worst part might be trying to get some food before the heatstroke takes over. Stella and I decided against sampling the food truck that claimed to sell fresh seafood (you know what Michigan is nowhere near? The ocean) and thanks to the art fair, our usual sleepy and well-stocked breakfast joint had run out of both Diet Coke and ketchup, which together make up a good thirty-five percent of what I eat.

Hmm, maybe my doctor should draw my blood more often.

So we ended up walking a good five blocks to the safety of the vegan restaurant. No crowds, no exhaustion of critical supplies, just cashews in everything. And I mean everything.

When we returned to the fray, we investigated a booth where a woman claimed to be able to tell your future by reading bones (legit) and another where all the art was made of humanely collected butterfly leaves, from necklaces and earrings to windcatchers and drawings.

“Wings are really speaking to me right now,” said Stella.

Meanwhile, I was tempted by steampunk goggles, which always speak to me, and say something like, “You don’t need us, but also maybe you do?”

There are always these gigantic sculptures of cacti and hummingbirds and flowers and fountains the size of my car and whirligigs that look like they’d take out your mailbox and the old lady next door in a storm. I don’t know who buys them, but somebody must, because they come back every year. 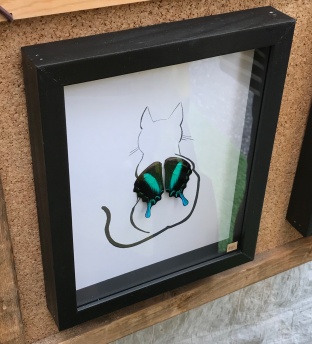 I also saw this character, whose motivations and background I don’t know at all, but she did flash me a peace sign, so her intentions must be pure. 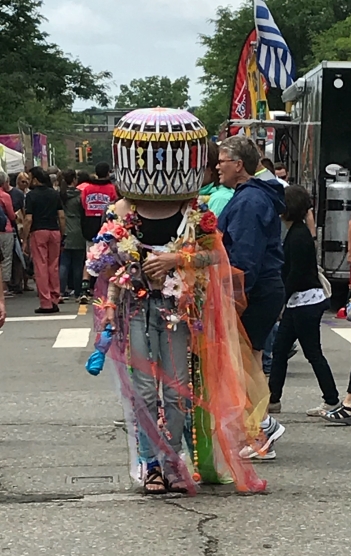 While I was distracted by following the basket lady, I lost Stella in the crowd. Now, losing your assigned adult during the art fair is the recurring nightmare of every Ann Arbor child: “I’m lost forever, so I’ll have to make my way selling water bottles or handing out pamphlets at one of the non-profit booths. Should I go to the Mars Society or the Ban Infant Circumcision people first?”

I wandered around for a few minutes, dodging the Jews for Jesus with ninja-like precision, until Stella found me. “Sorry, I was talking to the leaf people,” she said, pointing to a booth selling jewelry made of succulents.

“It’s the art fair,” I shrugged. “You’re going to get stuck talking to some leaf people.”

Here’s the other thing I had to do at my doctor’s appointment—get my yearly TB test, which isn’t a big deal, except the very evening before I had a class where I learned a ton about TB, like that it’s ridiculously contagious and super difficult to treat and kills millions of people every year and best case scenario you’re on debilitating antibiotics for a couple of years but oh man, if you get a drug-resistant strain, you are effed.

And it’s endemic pretty much everywhere on Earth, even good ol’ Ann Arbor.

So picture me wandering through a giant crowd of people, many of whom are coughing and sneezing and touching everything they possibly can, clutching my umbrella like a shield and glancing at my TB test to see if it starts glowing or something, all while Stella babbles about bud vases. It was quite the banner Ann Arbor day. 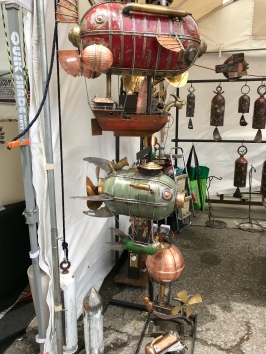 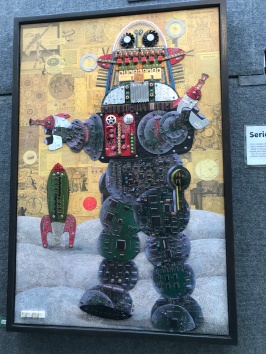 I didn’t end up buying anything—Stella got a really cool print of a sea turtle whose shell is a VW bus, because that’s who she is as a person—but the whole experience was worth it because I got to see a dog in a wagon that was tricked out with comfy blankets, water, and a battery-powered fan.

This dog was clearly living his best life, smiling at everyone as his human pulled him along, grooving to his own personal breeze and the acoustic guitars that seem to play themselves when downtown hits max capacity .

I’ve never seen a happier creature at an art fair. Maybe this is the heat talking or the fact that I walked 7.3 miles in sandals with only cashews as fuel, but I either want to be reincarnated as this dog or start a religion around this dog. Haven’t decided yet.