I was browsing the most haunted floor of my favorite antiques store when I came across a very vintage globe. It was faded and slightly falling apart, but it wasn’t that old—definitely made during my parents’ lives, it could’ve been in my dad’s classroom when he was a kid.

One of my bigger regrets in life is that I’ve never been a contestant on Where in the World is Carmen Sandiego. I watched it every single day in elementary school, and I’m not exaggerating when I say that I would have dominated. There is an alternate version of our universe where I am a local folk hero for being the greatest contestant that Where in the World is Carmen Sandiego ever had. I would be friends with the entire original line-up of Rockapella—yes, the original line-up.

I would know wherever Greg the host is now.

I don’t know where Greg is. No one does. Anyway, back to this globe.

My first stop was to check if this globe still had the USSR instead of Russia. Check (I still got it, Carmen). Yugoslavia and Czechoslovakia? Still going strong.

Romania is spelled Rumania. Sri Lanka is Ceylon, Myanmar is Burma, Ethiopia is Abyssinia.  Mongolia is the Mongolian People’s Republic. Thailand still has a “Siam” in parentheses. Vietnam is called Indochina. Malta and Hong Kong are marked with a “Br” since they were under British control, which Hong Kong was until 1997.

The Western Sahara is called Spanish Sahara, which I had never heard of. Apparently the colonialism game was so fraught back in the day that Spain held a tight grip on a patch of uninhabitable desert with no resources for 100 years, and they didn’t relinquish it until 1975.

Speaking of colonialism—all of Africa looked straight out of a book from the 19th century. It was mind-boggling. “French West Africa” encompasses what are now ten countries, and wasn’t dissolved until 1960. “French Equatorial Africa” is five countries today, also achieving independence in 1960. And by “achieving independence” I mean that the French cut their losses and left with all of the area’s wealth and resources, leaving a population that had been oppressed and exploited for generations to build a nation from scratch with the scraps left behind. And the country lines drawn by colonialism had no regard for cultural or religious or tribal borders, the effects of which are still getting thousands of people killed today.

Just seeing the name of the Belgian Congo gave me chills. Look it up if you want to have nightmares. North Rhodesia, French Guinea and Bechuanaland . . . if you’ve seen Black Panther, know that there’s a very good reason Wakanda had to hide to stay free.

If only Wakanda were real. If only that had worked for someone, for anyone. 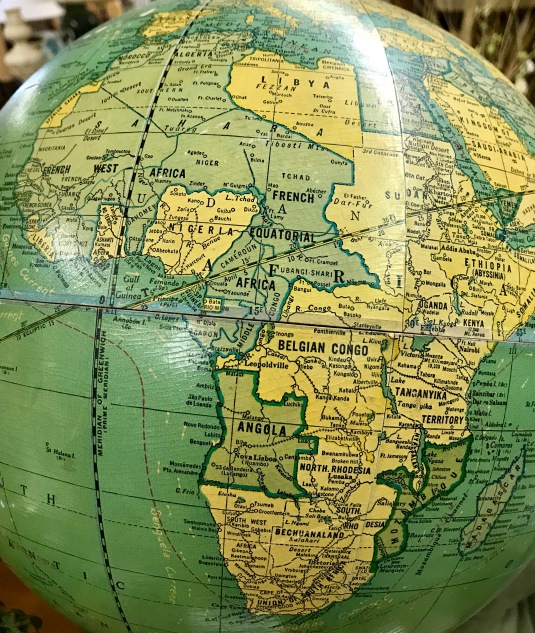 I spun around to Southeast Asia. This globe hadn’t had a good spin in a while, and creaked at every movement. India has been partitioned, so we’re post-1947 for sure, but there’s no Bangladesh yet—it was still East Pakistan, as it was until the ‘70s.

Israel is on the map, so that puts us post-1948. But here’s the weird thing. I looked to Europe, expecting to see Germany split in half, but it wasn’t. No little “W.” and “E.” as I’ve seen on every other Cold War map, not even a line splitting the country in two.

I did a little research, as well as I could with the lack of strong signal in the windowless basement floor of the antiques store (no windows means no way for ghosts to escape!) and found out that while Germany was divided immediately after the war, the official designations of East and West Germany were not official until 1952.

This was a very specific globe. Depending on how long it took to manufacture a globe at the very end of the ’40s or the dawn of the ’50s, either this globe was worked on down to the wire to get everything accurate, or it went to its first owner already outdated.

This globe was born an antique.

I’ve heard astronauts say that one of the most startling thing about seeing Earth out the window of a spaceship is realizing that there are no borders. That all these lines that a few dead men created with a pencil and a ruler don’t actually exist. These prison walls of our own creation, that decide our flags and futures and make the difference between life and death for millions, even now, even at this very moment, they’re all just imaginary. 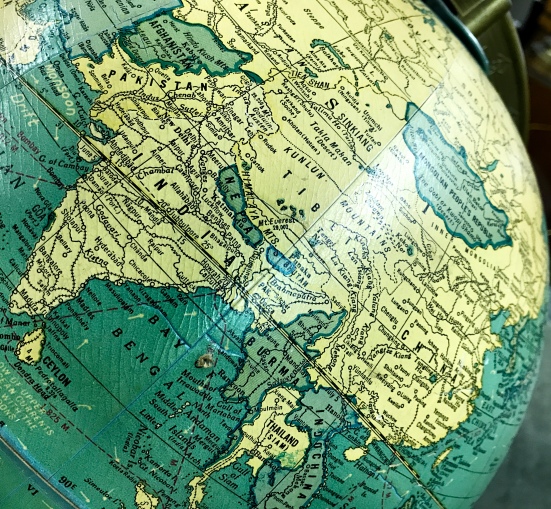