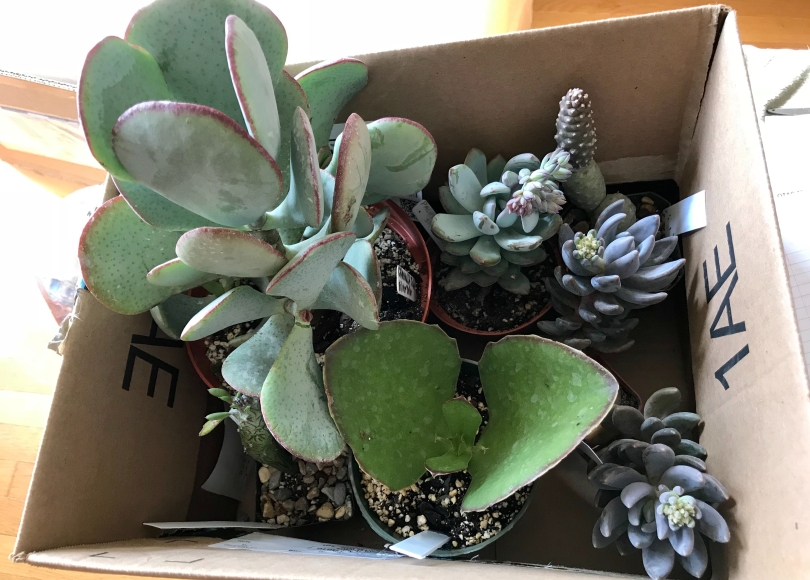 I’ve been eagerly awaiting the Exotic Plants and Succulents Sale at the Matthaei Botanical Gardens since the moment I left the last one in a bacchanaliac frenzy exactly one year ago.

I’ve lost so much sleep wondering what kind of plants they would have this year, and constantly reminding everyone that there’s only so many weeks/days/hours until the succulent sale— much like a small child counts down the days until Christmas, only there is no Santa Claus, just a guy in flannel named Ken who brings a truckload of echeveria hybrids.

Only my friend Jessie responded with the appropriate level of gravitas that the succulent sale deserves.

“We should get there when they open,” she said. “My dad has a membership, so we can get free parking—”

“AND DO THE MEMBERS-ONLY HOUR!” I said, very loudly, because this is important.

Every Matthaei event has a members-only hour, where the members get to peruse the flowers and merchandise and succulent-themed greeting cards for 60 merciful minutes before the raucous hordes of plebeians are allowed inside.

I’ve never gotten to go to members-only hour. But here was my chance. I was going to see the best plants and actually enjoy choosing which ones I liked without the sensation of being crushed in a stuck elevator filled with cacti.

Jessie and I arrived bright at early just before 9, with our own cardboard boxes to carry our plants, because we are pros—and unlike last year when I had to park across the county line and hoof it in the hot sun, we got a spot right in front of the gardens, and sauntered right up to the door . . . to find a dozen people already ahead of us, and a dozen more piling in behind us. Everyone else had their cardboard boxes too.

Guess we’re not the only pros in town.

“Holy crap,” I said. “There are people crazier than us.”

“Good thing we got here when we did,” said Jessie.

The volunteers, who are usually the most chill of even the chillest volunteer brigades in Ann Arbor, looked a little nervous as they addressed the rapidly growing line.

“We’re not doing a members-only hour this year,” they said. “It got too insane. One person passed out in line and people were parking all the way down on the main road, which is totally illegal. So sit tight and we’ll open the doors at 10.”

Our flight to the kingdom of succulents was a little delayed, but I had already waited a year. So we hung out and formulated our final itinerary.

“I think I want to do a first pass without picking anything out, like at a buffet,” I said. “Then go for a second pass and make my initial selections.”

“If they were really smart they’d have a food truck out here,” said Jessie. “And then the food truck would also sell plants.”

There was a football game later that day, and cars were rolling by with U of M flags attached to the windows.

“We should have made succulent flags for our cars,” said Jessie.

“Because we’re team succulent,” I said.

As the minutes ticked down, the crowd started humming with excitement. It was just like rope drop or waiting in line for a brand-new ride at Disney World, but with  very small plants instead of a roller coaster—and then the doors opened, and we were in.

“Should we go for Space Mountain first?” I said, entirely out of habit, and Jessie just looked at me curiously before we rolled into the greenhouse. 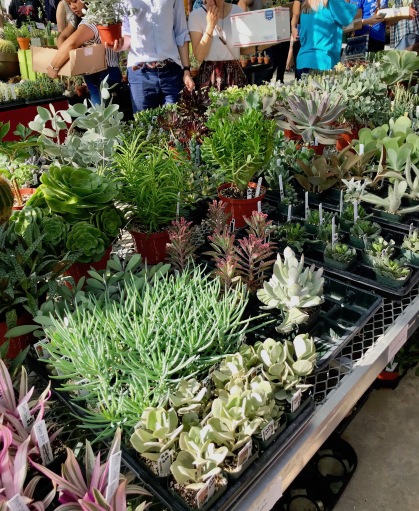 Along with a hundred other people, and I was dismayed to actually feel my panic symptoms checking in at the front desk before I’d even eyeballed my first plant.

No one even stopped to check out the bromeliads at the bromeliad table—they’re the “exotic plants”—this crowd was all about those sweet, sweet succulents.

“I feel kind of bad for the bromeliads,” said Jessie.

“I don’t,” I said. There’s no room for feelings at the succulent sale.

It was really hot in that greenhouse—again—and several of the folks packed inside had oxygen tanks, and that made me nervous. I lost track of my carefully planned itinerary almost immediately and just started weaving between the tables like this was my very first rodeo.

I don’t think I would do well in a combat situation at all.

We were intrigued by the 3D planters, which were going like hotcakes, only plastic. 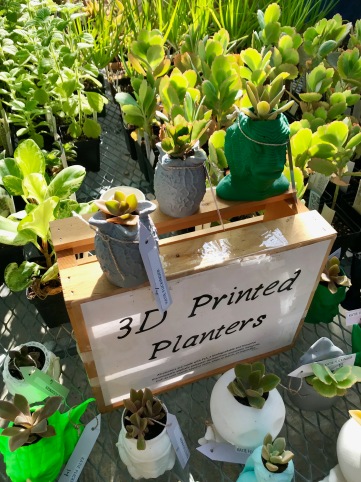 “Is that the Creature from the Black Lagoon or the fish man from The Shape of Water?” I asked.

Like the Twilight Zone, or traveling over Thanksgiving, the succulent sale makes you question your own mind and the fabric of everything you believe.

As my cardboard box filled itself with plants of its own accord (when did I put a pinecone cactus in there?), my biggest hurdle was parting with the tiny pathetic plants that had little stickers that said, “Not hardy.” I heard a college student say to her friend, “Oh, it’s not hardy? Put it back,” and I almost cried.

I got a little Drimiopsis last year that said “Not hardy” and I grabbed it because I felt bad for it (and crucially, not because I knew what it was or how to take care of it) and now a year later it’s one of my favorites.

The crowds were so intense that Jessie and I got separated near the line to pay, but we both made it out before the heat really got to us and we spent all our money. Jessie got seven plants, and I got six.

Then I returned home to a three-hour repotting marathon that I can only recall in flashbacks of flinging soil and capturing the exact moment that Lumi realized that her human is a crazy plant lady.

Did I mention that I’d made an actual spreadsheet of all my plants and who needed a new pot and who needed pruning and even left blank rows so I could write in the new arrivals?

Even still, after THREE HOURS of non-stop potting, I was done with plants for a little while. So when I woke up the next morning, and my first thought was, “I wonder what’s left at the succulent sale,” my gut reaction was “Oh hell no.”

I confided this to Jessie, who admitted that she wanted to check out what was left too.

I had a lot to do—like prepare for six tests that are occurring over the next eight days—but I stopped in a couple of hours before the sale closed. It was like the last day of Burning Man—lots of weary-looking volunteers and plant debris scattered everywhere.

An adult man in a Boy Scout uniform was rifling through the last of the air plants. And everything was picked over—I’d say a good 90% of the previous day’s inventory was gone.

I texted Jessie that there wasn’t much left, not even the Black Lagoon/Shape of Water planter, and she said, “Now you can get the sad ones that need a home!”

They must have seen me coming a mile away though. I picked up one small plant  and a volunteer yelled to me from across the table, “That one needs water! It would make a good bonsai!”

Poor little thirsty plant. How did she know I wouldn’t be able to resist that?

Well, I did. Because I grabbed this little Drimiopsis. It’s for science, you know—can I replicate the same positive results as its big sibling? 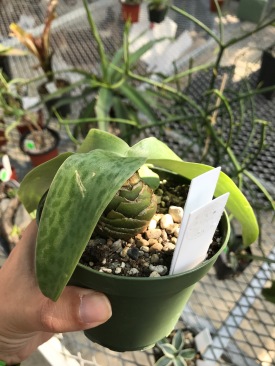 Next year, I’ll have a really foolproof plan. I only have 364 days to figure it out.