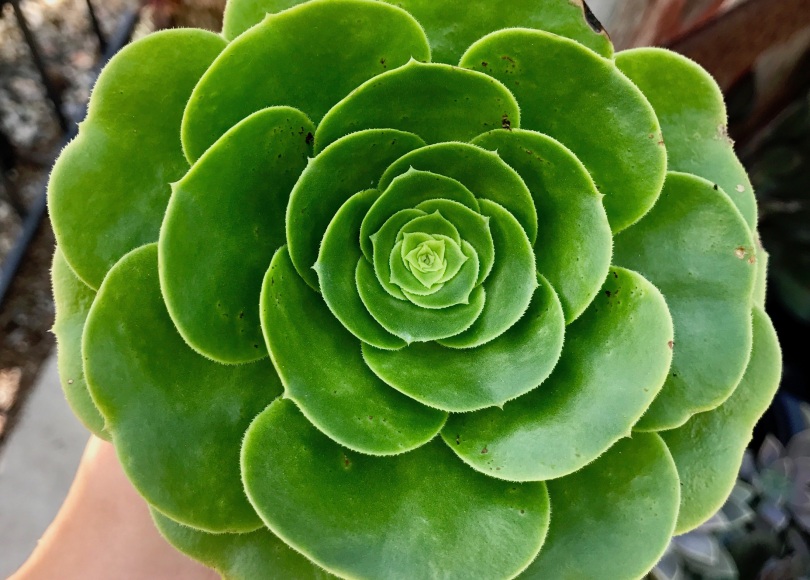 Confession time: I am a crazy plant lady. I take good care of them and they make me happy, so it’s okay, right? When I’m a little down, I repot a plant or two and I feel great. When my anxiety is ramping up, I buy a new plant. Or two. Succulents are like five bucks. They’re cheaper than ice cream and they don’t have any calories.

I may have too many plants. 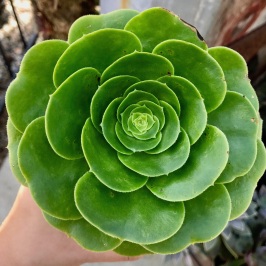 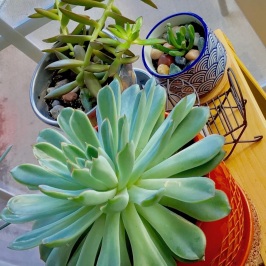 So when I drove past one of my favorite spots in town, the Matthaei Botanical Gardens, and saw this sign, I did the full cartoon slam on the brakes and shouted to no one, “Put that on my calendar!”

This sale kept me awake at night for two weeks. When it finally arrived, I got to the gardens at 10 on Saturday morning, because I wanted to see the good plants before they got sold (anxiety!). I wasn’t planning to stay long, or even buy more than one (or two) plants. I’ve been to the orchid sale and bonsai sale and the flower basket sale so I know these events get crowded, and then I get nervous, so my trusty strategy has always been “get in, get plant, get out,” and it’s never let me down .

But there’s regular crazy and then there’s succulent crazy.

At only a few minutes past 10 in the morning, I found myself at the end of a rapidly growing line that had already spilled outside the actual building.

Now, if you’ve read my previous post you know that I’m a Disney veteran who does not get thrown off by a line—but they don’t sell exotic plants on Peter Pan.

People on their way out were passing by every few minutes, carrying giant boxes full of plants that. I. wanted. A man the size of a linebacker hustled by with his arms full of air plants. A girl with a giant Amazon box full of plants said, “Can’t wait to get them home and introduce them to their brothers and sisters!” and I almost cried.

This was not the usual plant crowd either. Sure, the requisite elderly ladies in sun hats and purple sweatpants were there (aka my heroes) but there were also hipsters with too many tattoos and questionable blue hair stripes, people with kids who were not psyched to be dragged to a plant sale, babies in strollers, and college kids excitedly planning where to put their plants on their single windowsill.

I texted Stella, “Good news! I’m not the only crazy plant lady. Bad news: the crazier plant ladies are going to take all the good plants.”

“Yeah man, you gotta get in there,” she said. “The plants need you!”

The young couple behind me were in full complaining mode. “We don’t want to spend our whole Saturday waiting in line,” they agreed, and bailed.

I was now about halfway to the entrance.

I focused on my phone so I wouldn’t have to look at the people leaving and the plants they had bought, but still, I was consumed with anxiety. What if they run out of plants? What if I get in there after all this effort and all the plants left are gross and dying? What if my dream plant is in there? I don’t even know what my dream plant would be, but what if I have one and it’s in there and someone’s buying it right now who won’t know how to take care of it and it’ll die—

“It’s worth the wait!” she said. “They won’t run out of plants, I promise. I’m only leaving because I have too many. But it’s worth it!”

I watched her head out the door, wondering what adventures awaited her.

“I want to befriend this person but I can’t leave the line,” I texted Stella.

I have worn glasses since second grade and I have never seen pentagon-shaped frames. They were tortoiseshell. Where does someone buy pentagon-shaped tortoiseshell glasses? What experiences has this person had that made her go, “You know what? Rectangles and ovals are boring. Life is short. I’m going with pentagons.”

I would buy her whatever drink she wanted to hear her life story.

After a good 25 minutes (which as my dad will tell you, is not that bad, especially for a big ticket ride. We could do 25 minutes for Toy Story Mania in our sleep), I was at the entrance to the sale. My muscles started to tense, ready to run in as soon as the young volunteer who got the job of “bouncer for the succulent sale” deemed me worthy.

“This is pretty crazy,” I said, flashing my best smile.

I swear I heard a choir sing.

There was a table full of cardboard boxes and I made sure to take the smallest one, as an attempt to counter my hoarding tendencies. At this point, I swear I was only going to buy one plant, maybe two. Stella wanted a little succulent, and A needed a new hanging plant for her office, so I had two missions to complete.

I ventured into the fray, carrying my little empty box in front of me for protection, and a third mission made itself imminently clear: survive.

If you’ve ever been in a crowded elevator and then the elevator stopped and another dozen people got in, and the elevator was stuffed full of plants and also an actual greenhouse with glass walls that, you know, conduct sunlight so everyone is instantly sweaty, you would understand the vibe of this sale.

In other words: claustrophobia officially triggered. 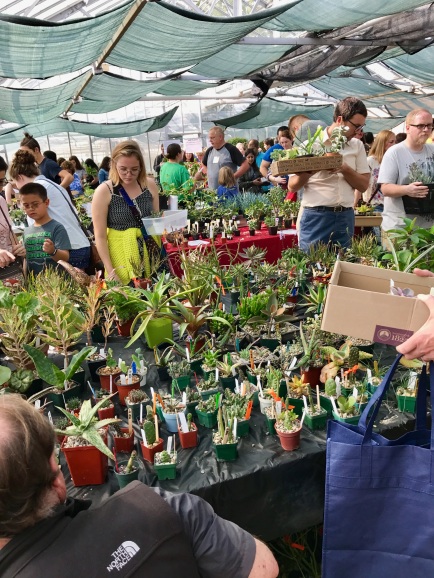 This was Black Friday for succulents.

A woman behind me loudly complained that she had just set down a plant she wanted to buy for two seconds and someone had grabbed it. No one around her looked sympathetic.

It was every plant person for themselves.

I don’t remember when I transitioned from “buy two plants” to “buy every plant” but it must have been somewhere around the time that a guy tried to sell me this rare little beauty—for 45 dollars!

I put that sucker right back. Do I look like I started buying succulents yesterday?

Of course, I almost bought a rare plant from Indonesia that depends on ants colonizing its root pod for nutrients.

I thought A might like one as well, and then I would have to get one for Stella too, because who wouldn’t want a super-cool ant plant?

When I told A about this, she was horrified.

“If your plant lived that would mean you had ants! In your house!” she said.

“I thought they looked cool!” I said. “And they were only 7 dollars!”

“You’re paying 7 dollars TO GET ANTS!”

Fortunately, sanity prevailed in the moment, and I put the ant plants back.  Still, I was in frenzy mode. I picked up a plant that I just had to have, then put it back a few minutes later. I grabbed a plant for Stella, fell out of love with it, then got her a different one. All the while I’m weaving in and out of endless lines of hot, sweaty people, their faces all dawning with the realization that humans are indeed animals and when the competition gets tough we will resort to our most primal instincts.

Fortunately, Disney has trained me well, and I worked my way through the crowd with a minimum of panic symptoms. I did have a quick fantasy about bumping into my first anxiety therapist and saying, “I did it! Look where I am right now!” But then I would have had to shove her aside to get to the plants.

And then, I saw it—the Holy Grail of the succulent sale—the only hanging basket left in the entire joint. I grabbed it before I could even read the tag. And not to brag, but I read very quickly. That’s how heightened my reflexes were.

“That’s a really nice one,” the seller told me. “Just don’t overwater it, and it’s almost indestructible. Hey, and it’s my last one! You were lucky.”

I clamped down on this thing so hard that you’d think I was trying to sneak it out of the country. And getting it out of the sale was almost as hard. 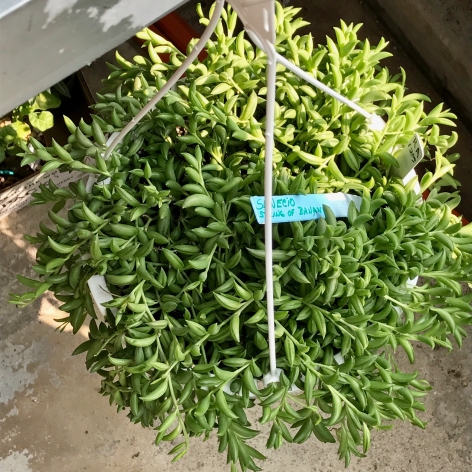 Now that I was struggling to make my way through the throng with this basket on my arm, people were whipping around to look at me and loudly ask if there were any left.

When I squeaked, “Sorry, this was the last one!” they looked at me the way my cat does when he’s hungry and about to chomp whatever skin I’ve made the mistake of exposing. The narrowed eyes of, “You have something I want. Prepare to die.”

My Amazon box was now packed tight with six little plants—one for Stella, one for A, and (cough) four for me. A volunteer very kindly offered to get me a bigger box and that’s when I realized, “I gotta get out of here.” You know, the way that Dorothy or Coraline or whoever is having a great time in the other universe until something makes them realize, “This is all wrong! I have to go home!”

This was my Auntie Em moment. But getting out was even rougher than getting in, plus I had this heavy hanging basket on my arm, and it was the last hanging basket in the entire sale.

I finally understand the expression, “People were on me like I had the last bump of coke at the party.”

It took three different attempts, but I finally got in the right line to pay. It took all my strength not to duck out and take one more look-around or grab one more teeny tiny plant that was only $2 and needed a home where it would be loved . . . anyway, I cashed out, and honestly it was cheaper to get seven plants than to go out to brunch, so I did really well.

As I made my way to freedom, past the now even longer line, people looked at my hanging plant with envious eyes. “Did they have a lot of those left?”

I hustled past before anyone could offer me money for it.

The line was easily three times longer than when I went in—instead of extending just outside the building, the line now went around the building and into the parking lot. So if I waited 25 minutes, those people were in for about 90. That’s a Space Mountain during spring break wait.

I made my way to my car, which was parked a full nautical league away, carrying this box and hanging plant. My arms were shaking by the time I made it.

I had been at the gardens for two and a half hours.

When I got home, my cat was waiting for me with an expression of, “What did you bring home this time?” 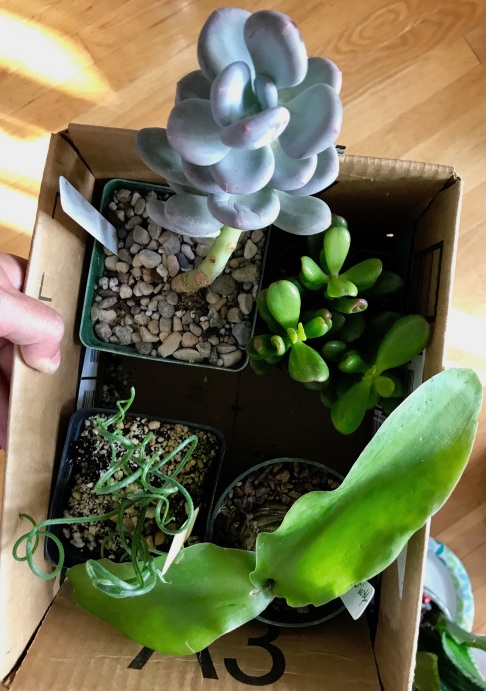